We recently added data from the Province of Alberta to our data warehouse of municipal financial information for British Columbia.  Aside from enabling visual dashboards for those municipalities, the additional data permits statistical analysis of a simple question:

How much property tax should local governments be collecting?

A quick scan of social media and the opinion page of any local newspaper gives the impression that most people believe their property taxes are well above average—a kind of confiscatory Lake Wobegon effect.  This reply on Twitter is representative: 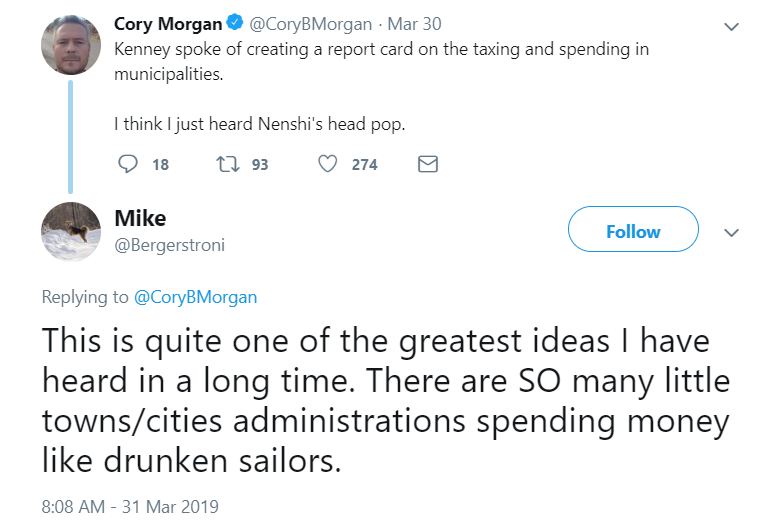 Like most people, I do not like paying property tax.  However, I voted on ten budgets when I was in local government and saw the other side of it: people want services and each dollar spent by the local government can create more than one dollar in value for the community.  Of course, the opposite is also possible: government spending can destroy wealth when the cost of a service exceeds its aggregate value.  The core problem is this, however:  We cannot know whether most government spending creates or destroys wealth because most government activity occurs in areas in which markets fail (this is really the point of government).  But without a market-based price signal about people’s willingness to pay for services, it is difficult to know whether the services are worth offering.  In this sense, the optimal level of government expenditure is unknowable.  Politicians are left to guess about aggregate willingness to pay and budget accordingly.

A good way to make better guesses is to benchmark finances against peers:  How much does my community spend compared to similar communities?  Benchmarking of this type does not ensure economic efficiency (in the formal sense discussed above), but it does provide a measure of social proof:  If my community can provide roughly the same level of services as other communities at roughly the same cost, then perhaps we are close to the optimum level.  It is only when we deviate too far from the rest of the herd that we ask whether we have the right balance between service levels on one hand and taxation on the other.

Benchmarking is comparison and comparison is almost always easiest when we invoke our brain’s visual pattern matching capabilities.  Thus, the first step in benchmarking is to draw a picture.  Below is my first kick at it.  I have plotted total taxation for each community in BC and Alberta against the community’s population. (Note: All the visualizations in this post have been created using Tableau and posted to Tableau Public in order to permit interaction.  For example, you can mouse-over any of the data points to get the name of the local government.  Simply labeling the 310 points in a static document results in an impenetrable jumble of text.)  In addition, I log both axes in order to make graph more readable.  The size of communities follows a power law, which means that the vast majority are much smaller than the handful of large ones.  Logging the axes evens out these differences a bit since each tick no represents a constant multiple (e.g., 10x increase in population). 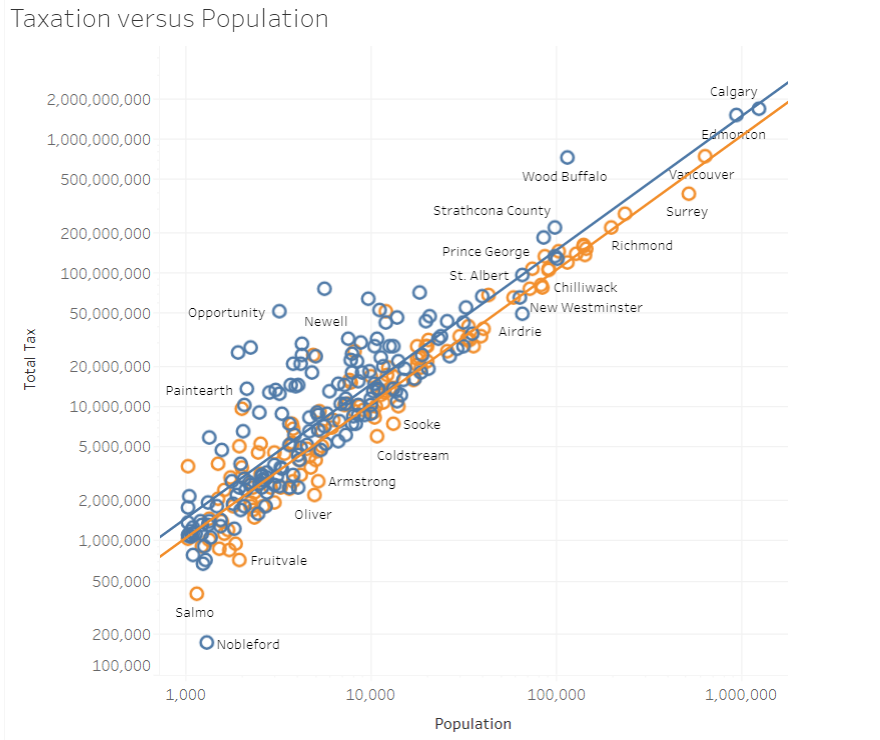 The most salient feature of this plot in my mind is how linear it is.  This suggests that the taxation collected by municipalities is largely a function of population.  Of course, there is some deviation above and below the trendlines, but not as much as I would have thought given the oft-cited heterogeneity of communities.

A multi-dimensional model of taxation

Refining the model to get a better fit—that is, to explain more of the observed variation in taxation—typically involves the addition of explanatory variables.  Indeed, the visualization is already based on a multi-variate model because I distinguish between BC and Alberta.  According to the visualization, “Province” appears to be an impactful distinction: the Alberta trend line is higher than the BC trendline, suggesting that the two provinces have systematically different property taxes.  This does not make real-world sense to me.  If anything, I expect oil and gas revenue to trickle into municipal coffers and thus reduce the need for Alberta municipalities to tax.  In other words, I think the BC/AB split might be a proxy for something else.

The difference between BC and Alberta municipal taxation largely disappears once we add better explanatory variables to the model.  However, the addition of explanatory variables undermines our ability to visualize relationships.  Humans are good at eye-balling a line given two-dimensional data but are lost fitting hyperplanes in four or more dimensions.  For this reason, we must use tools other than visual analytics.  In this case, I have used multiple linear regression to create a surprisingly simple model of taxation as a function of population, physical extent, and latitude.  The technical nuts and bolts of model building are covered in a separate document.

The advantage of a model is that we can use it to return to the comfortable realm of two-dimensional visualization.  Specifically, given an n-dimensional model (which is impossible to visualize) we can instead compare the model’s predictions to observed values.  Significant deviations from the model’s predicted values suggest significant differences in taxation and spending.  These deviations may be the result of special circumstances (e.g., remoteness) or explicit strategic choices within the community (e.g., a commitment to exceptional amenities).  Or they may point the bumbling and buffoonery that so many Canadians seem to think is endemic to our political institutions.

The fit plot showing observed taxation versus predicted taxation is shown in a Tableau Public visualization (again, to take advantage of its interactivity). 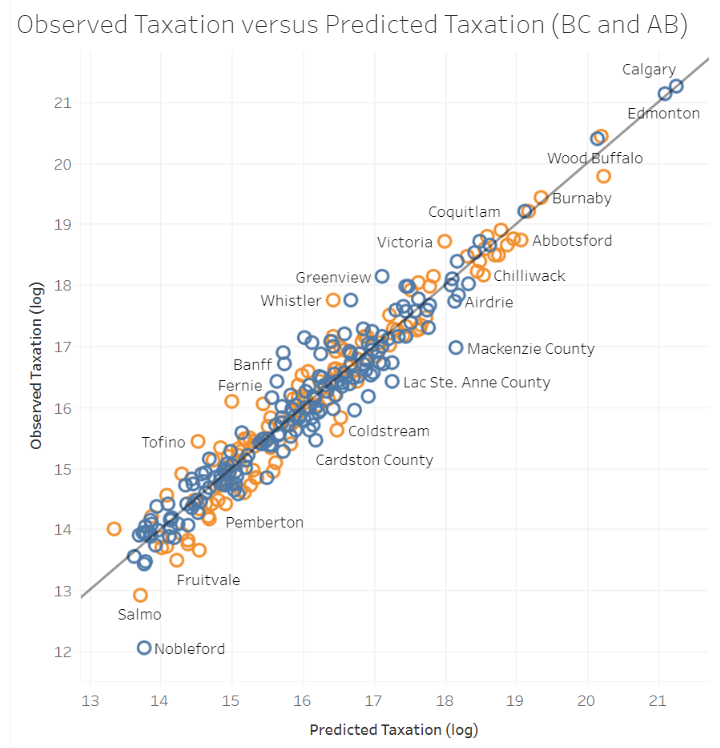 Here we see a fairly tidy convergence of points around the trendline.  With only three simple explanatory variables—population, physical extent, and latitude—we achieve an R2 of 0.93 (recall model).  Of course, the logged response variable hides the true magnitude in dollars of the differences between communities.  But the essential fact remains: the variation in taxes attributable to the three simple situational variables is much greater than that attributable to other causes—including bumbling and buffoonery.

Finally, we can rank communities by their relative deviation (positive or negative) from the predictions of the linear model.  I am loath to rank because, as discussed above, communities face different situational challenges and make different strategic choices.  Moreover, negative deviations are not necessarily good.  They could indicate, for example, serious underinvestment in services, infrastructure, or reserves.  The point is simply this: regardless where a community falls in the relative deviation ranking below, their position should come as no surprise.  That is, each community should already understand why it is high, low, or middle of the pack.  If not, our dashboards might be a good place to start to look for explanations. 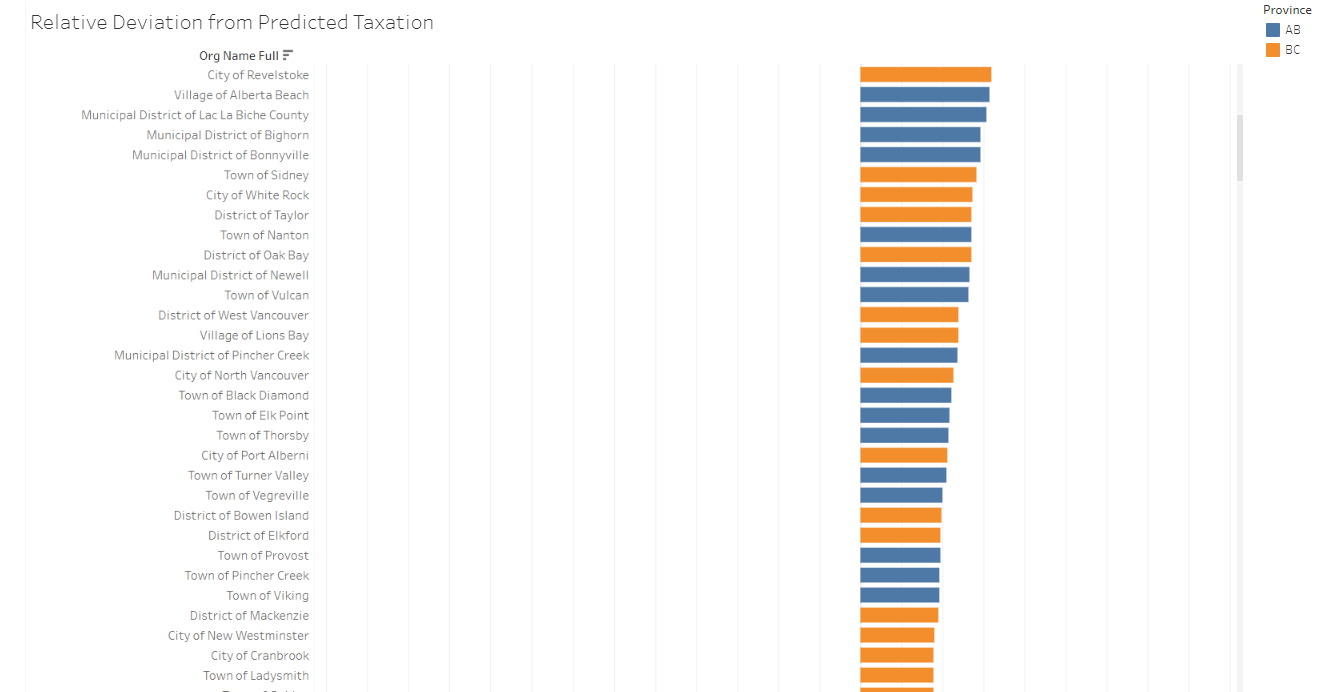